What is Angelman syndrome?

Angelman syndrome is caused by loss of function of the maternally-inherited copy of ubiquitin-protein ligase E3A (UBE3A) gene, which sits in the chromosome 15q11.2–q13 region.2,3 The timely diagnosis of Angelman syndrome is difficult given the lack of specific clinical caveats or dysmorphic features in infancy and the several genetic mechanisms that impair UBE3A expression.3

The 3 protein isoforms include the Homologous to E6AP Carboxy Terminus (HECT) domain and are thus capable of functioning as an E3 ligase.1

E6AP catalyzes the transfer and covalent linkage of activated ubiquitin (a 76 amino acid protein) to target proteins.1 This domain is encoded by exons 9–16 and forms a bilobed structure with a broad catalytic cleft at the point where the two lobes meet.1 A cysteine residue sits at the catalytic site where it accepts ubiquitin from the E2 ubiquitin-conjugating enzyme.1 Mutations within the cleft interfere with the formation of the ubiquitin-thioester bond; a necessary step before ubiquitin is transferred to substrates.1 In Angelman syndrome, mutations are due to missense or single amino acid insertions or deletions over the entire length of the protein.9,10,11 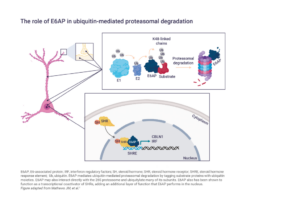 The inactivation or deletion of the maternal copy of the UBE3A gene which causes Angelman syndrome occurs by several different genetic mechanisms.12 Importantly, both Angelman syndrome and Prader-Willi syndrome are caused by reciprocal deletion of the human chromosome interval in this region.13 Prader-Willi syndrome, however, is caused by loss of the paternal expression of several contiguous genes, and manifests with a distinct phenotype.13

Interstitial deletions occur in ~70–75% of patients,12 deletions are approximately 5–7 Mb in size.2 Most of these occur de novo and are of maternal origin.2,10 Phenotypic differences between patient groups are attributed to genetic mechanisms.10,12 Of these, patients with chromosome 15 deletions are usually the most severely affected.12 They have a higher incidence of seizures, microcephaly, hypopigmentation, absent speech, and a greater delay in motor milestones.12 According to the Rare Diseases Clinical Research Network (RDCRN) Natural History Study data, non-deletion participants had significantly stronger expressive communication skills based on age-equivalents and growth score equivalents at age 6 than those with deletion.14

The 15q11.2–q13 chromosome region is subject to genomic imprinting, an epigenetic process that renders genes to be monoallelically expressed in a parent‐of‐origin‐specific manner.12 An ID affects approximately 3–5% of individuals with Angelman syndrome;12 these can be caused by genetic or epigenetic alterations affecting methylation and gene expression throughout the imprinted domain in 15q11.2–q13.2 The imprinting center is located in the small nuclear ribonucleoprotein-associated protein N (SNRPN) region.2 Imprinted expression of UBE3A is regulated indirectly by small nucleolar RNA host gene 14 (SNHG14, formerly known as UBE3A-ATS).2 SNHG14 is a non-coding antisense transcript that extends into the UBE3A gene and interferes with its transcription.2 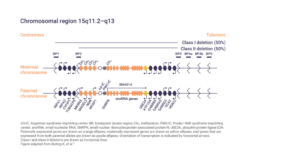 In individuals with Angelman syndrome, chromosome 15 is inherited in a biparental manner, but the maternal copy lacks methylation of the SNRPN promoter.2 SNHG14 is subsequently expressed, leading to suppression of the maternal UBE3A transcripts.2

Mutations can be identified in 14–20% of sporadic patients with normal methylation and in ~75% of familial patients.12,16,17 As outlined, the catalytic cleft between the 2 lobes of the HECT domain is the site of many of the reported mutations, although mutations have been found along the entire length of the protein.9-11

In ~10–15% of cases, the molecular exam is normal with no deletions, UPD, IDs, or UBE3A mutations.16 Patients are likely to be heterogeneous and may include those with other disorders.12

The signs and symptoms of Angelman syndrome 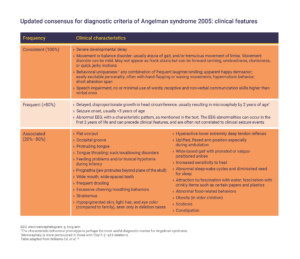 A wide index of clinical suspicion is necessary for children demonstrating the behavioral features seen in Angelman syndrome as they are the most consistent clinical feature.12

The estimated prevalence of Angelman syndrome

The most recent studies have calculated incident rates relative to the larger population, following exploration of the number of cases of Angelman syndrome among populations of individuals with severe epilepsy/intellectual disability.25 While valuable for providing estimates, these studies sample from larger populations and so do not reflect the true incidence of Angelman syndrome; consequently, the disorder is often undiagnosed or misdiagnosed.25 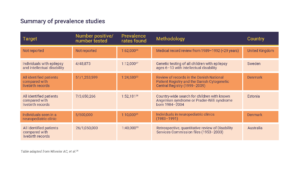 Determining a diagnosis of Angelman syndrome

Molecular genetic testing approaches to establish a diagnosis of Angelman syndrome can be based on either the clinical findings or the laboratory findings that suggest the condition.21 DNA methylation analysis identifies ~80% of individuals with Angelman syndrome and is typically the first test ordered.21

Individuals with Angelman syndrome caused by a 5–7 Mb deletion of 15q11.2–q13, UPD, or an ID have an unmethylated paternal imprint.3 Methylation can be detected by methylation-specific polymerase chain reaction (MS-PCR), southern blot, or methylation-specific multiplex ligation-dependent probe amplification (MS-MLPA) testing.1 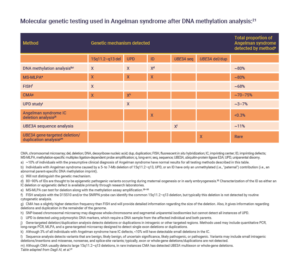 What is the prognosis of Angelman syndrome?

The clinical features of Angelman syndrome are severe and lifelong, which results in a burden on both the individual and family.25 Lifespan does not appear to be affected; although data are not available.21

The discrepancies in reported epidemiology and the absence of population-based studies result in a lack of awareness of Angelman syndrome.25 This subsequently results in lengthy diagnostic journeys. Despite the paucity of data on Health-Related Quality of Life (HR-QoL), the impact of Angelman syndrome on both the individual and the families and caregivers is thought to be significant, particularly as individuals rarely obtain the skills necessary to manage daily living tasks independently.25

Impact on the individual

Many studies have reported on Angelman syndrome since its description, which has resulted in a clear picture of the health issues of children. Less is known is about the course of the syndrome in adulthood.

Although there have been very few systematic explorations of the burden on parents, it has been reported that caregivers report high levels of fatigue and adverse effects on their social life.25 This is notable in cases where the individual with Angelman syndrome experiences sleep disturbances.25 An important impact on caregivers is stress as a result of children’s behavior challenges; parents of children with Angelman syndrome report more stress than parents of children with Prader-Willi syndrome.35 Parenting stress is also associated with negative outcomes for the parent, such as depression.25