What are mitochondrial disease-associated seizures?

Mitochondria are widely recognized as the energy-producing “powerhouse” of a cell.1

The mitochondrial respiratory chain is responsible for generating adenosine triphosphate (ATP) through oxidative phosphorylation. A mutation in the chain’s genome may compromise its function, resulting in cellular ATP deﬁciency.2 Consequently, the clinical features of mitochondrial disorders are most apparent in tissues with high-energy demands, including the central and peripheral nervous systems.2

Mitochondrial disease, which can arise at any age,2 affects approximately 1 in 5,000,3 with seizures and epilepsy being common features.4 Seizures rates are higher among people with mitochondrial diseases than in the general population.4

According to the Orphanet database, several diseases fall under the umbrella of mitochondrial disease associated with seizures.5 These include, but are not limited to:

For adults with mitochondrial disorders where seizures are a common feature, they may be broadly grouped into four main categories:

Since a primary function of mitochondria is to generate cellular ATP, it has long been assumed that epileptic seizures in mitochondrial disorders are a consequence of neuronal energy depletion. However, if this were the case, then 100% of patients with mitochondrial disease would be expected to present with seizures.7

Beyond energy deficiency, potential mechanisms causing seizures in mitochondrial disorders found in animal models and in vitro studies include:

These causal factors feed into a complex interrelationship, whereby a molecular cascade is triggered, with each component feeding-back to other components of the cascade, leading to a vicious spiral of mitochondrial dysfunction, seizure generation, and cell death.7 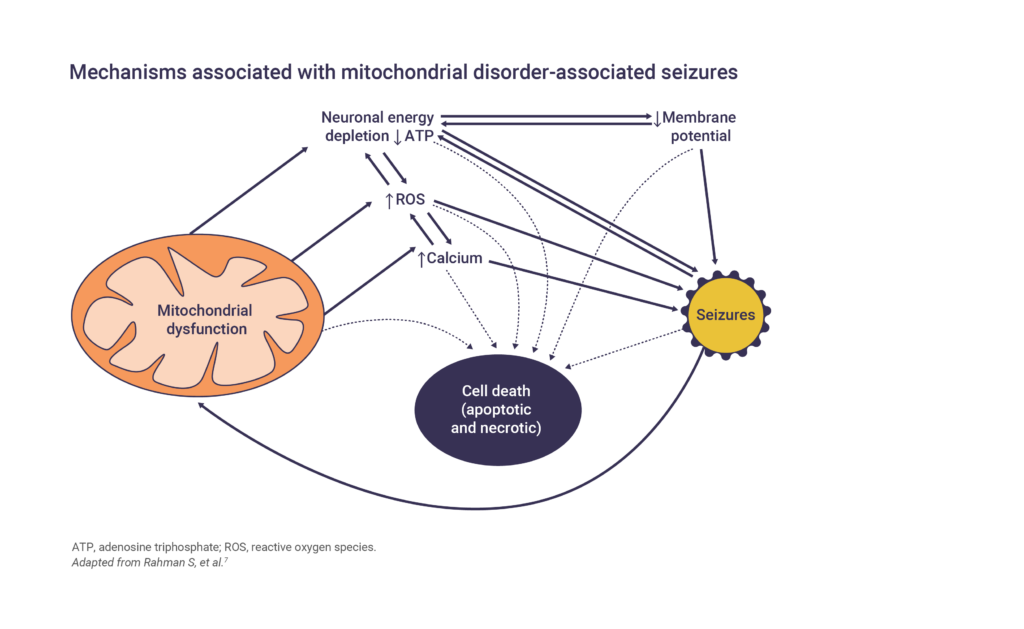 The signs and symptoms of mitochondrial disease-associated seizures

A study of individuals with childhood-onset mitochondrial disease (N=174) found that the average age of their first seizure was 2.86 years.4 Individuals with childhood-onset epilepsy who go on to receive a diagnosis of a respiratory chain defect often experience preceding symptoms of failure to thrive, psychomotor delay, ataxia, encephalomyopathy, multi-organ symptomatology, or a ﬂuctuating clinical course.2,31,32 The presentation of epilepsy in children can be highly varied, from infantile spasms, generalized seizures, focal seizures, and myoclonic epilepsy to refractory status epilepticus.6

Furthermore, the seizures in mitochondrial disorders differ from seizures in other contexts. Specifically, they are more frequently of posterior quadrant and occipital lobe onset, more likely to present with non-convulsive status epilepticus which may last months, are multi-drug resistant from the onset, and may only minimally correlate with electroencephalogram (EEG).6

The current prevalence of childhood-onset mitochondrial disorders has been predicted to range from 5 to 15 cases per 100,000.33–39 Although the exact prevalence of mitochondrial disease-associated seizures in children is unknown, seizures are commonly reported in 20–60% of individuals with biochemically or genetically conﬁrmed diseases.6,31,35,37,40,41

In adults in the Northeast of England, the minimum prevalence rate for mitochondrial mutations has been estimated as 1 in 5,000.42 Results based on a group of 182 patients with mitochondrial disease in England found that the prevalence of epilepsy was 23.1%, with a mean age of epilepsy onset of 29.4 years.43

Diagnosis of mitochondrial disease is often challenging unless the symptoms are clearly identified as part of a specific mitochondrial mutation (such as in MELAS or MERRF).2,44 Recognition of mitochondrial disorders in children is particularly challenging, and diagnosis can be even harder. Compared with adults, children are more likely to have a nuclear DNA mutation, where classic syndromic findings tend to be absent.44

In adults, diagnosis of a mitochondrial disorder is comparatively straightforward. Adults tend to present with well-defined mitochondrial syndromes and generally carry mitochondrial DNA mutations that can be easily identified.45

Diagnosis often relies on genetic testing, in addition to histochemical and biochemical analysis of tissue biopsies.46 Multi-gene panel testing has traditionally been used to determine genetic epilepsy syndromes associated with mitochondrial disorders. However, assessment panels can quickly become obsolete and screening for mutations of the underlying genetic defects in epilepsy is often complicated by the many potential responsible genes. Newer gene discoveries and whole exome or genome sequencing, including next generation sequencing (NGS), are increasingly being used as diagnostic tools. These techniques allow for the identification of pathogenic variants and variable sites implemented in the development of epilepsy.6,47–49

EEGs have limited utility for diagnosis, given that there is not a discernable “characteristic mitochondrial EEG”. That said, there are some features potentially suggestive of a mitochondrial disorder, including abnormalities with a posterior predilection, periodic lateralized epileptiform discharges (suggestive of MELAS in children), and focal high-voltage delta waves with polyspikes (may occur in acute stroke-like lesions in MELAS).2

Likewise, neuroimaging is of limited value given that brain imaging may be normal, especially in nonsyndromic mitochondrial disease or early in the disease course. Nonetheless, features frequently identified in people with respiratory chain defects and seizures include prominent and progressive cerebral atrophy, cortical signal change, stroke-like episodes, and symmetrical extracortical lesions.2 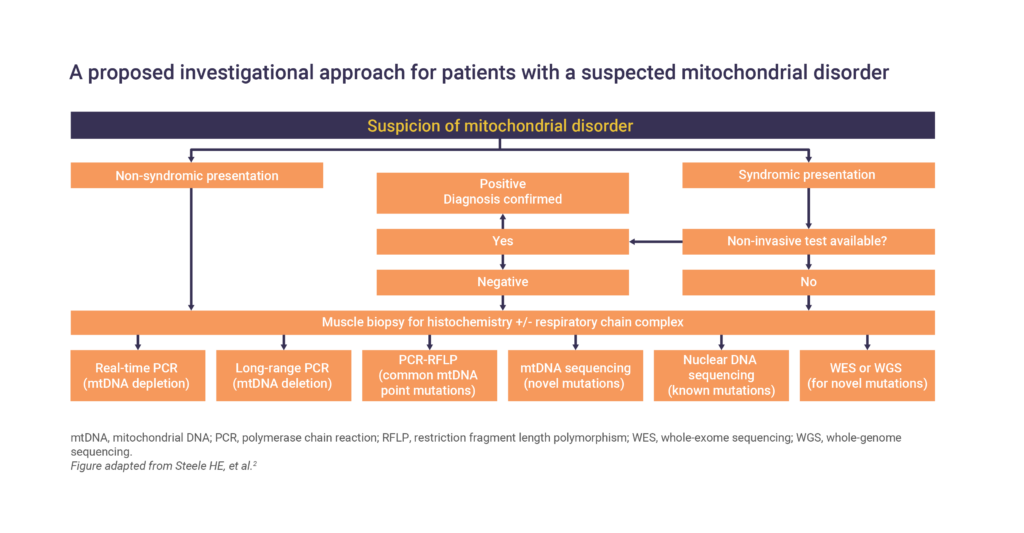 What is the prognosis of mitochondrial disease-associated seizures?

While the rates of premature death are high among people with mitochondrial disease,50,51 the added presence of epilepsy may not increase the risk of mortality.43

There are currently no speciﬁc curative treatments for the causes of pediatric mitochondrial disease-associated seizures, except for the rare primary coenzyme Q10 deﬁciencies, which can be successfully treated by coenzyme Q10 supplementation.6 While mitochondrial disorders are not curable, many of the typical comorbidities can be treated.

Generally, seizures should be managed by a pediatric neurologist with appropriate use of anticonvulsant medication.6 Choice of medication should be guided largely by whether the seizure has a focal or generalized onset.2 As a general rule, especially in disorders associated with mutation in DNA polymerase subunit gamma (POLG), sodium valproate should be avoided because hepato-toxicity can be severe, sudden, and fatal.6

Given that seizures in mitochondrial disorders may be triggered, or exacerbated, by metabolic disturbance, physicians should aim to regulate the biochemical milieu by ensuring appropriate hydration, normalizing blood glucose, managing acidosis, and treating concomitant infections where present.2

While the prognostic evidence is limited, a ketogenic diet has been shown to reduce seizures, and may be an adjunct to traditional pharmaceutical agents in the acute setting.2,52–55

On occasion, vagus nerve stimulation has been used, however there is currently little evidence for its efficacy. Palliative care should also be a consideration for clinical teams.2