What is acute myeloid leukemia?

Acute myeloid leukemia (AML) is a hematological disease characterized by the block of myeloid differentiation and clonal expansion of immature myeloid cells (blasts) in the bone marrow and blood.1,2 While statistically being a relatively rare cancer type (1.0–1.6% of all new cancer cases among 15–39 year olds),3 AML is the most common adult acute leukemia, accounting for approximately 80% of acute leukemias in adults,4 with an increasing incidence as a result of the aging population.5 AML is the most common adult acute leukemia, associated with smoking, prior chemotherapy treatment, and exposure to radiation.5

In contrast, AML in childhood accounts for 20% of pediatric leukemias.6

AML is a complex disease with a complicated pathogenesis, driven by multiple mutations.7 Malignant transformation arises from various genetic and epigenetic changes in hematopoietic stem cells (HSCs) that accumulate with age.2 More than 50% of patients with AML have relapsed and/or refractory disease over 3 years,5 associated with high mortality (cure rates no higher than 10%).8  According the to the National Cancer Institute: Surveillance, Epidemiology, and End Results Program (SEER), 5-year overall survival is 29.5%, and about 11,400 deaths are estimated in the US in 2021.9

AML classification has been informed by the expansion of diagnostic techniques, which play the most important prognostic role.10

As pediatric AML is relatively rare, risk stratification for pediatric AML is largely based on the same genetic categories that have been established in adult AML.13 However, some notable differences exist in the prevalence of different karyotypic and molecular abnormalities between adult and pediatric populations.13

Whole genome sequencing has shown that AML is a complex disease, consisting of more than 10 different subtypes based on molecular characteristics.10

Epidemiological risk factors for AML development include environmental factors such as smoking and benzene exposure, therapy-related factors such as chemotherapeutic agents or radiotherapy exposure, and familial/genetic factors such as Down syndrome or the presence of the Philadelphia chromosome.15

AML originates from HSCs with stepwise acquisition of genetic and epigenetic alterations. These accumulated mutations compromise normal HSC functions, blocking differentiation and increasing self-renewal capacity.16 As a consequence, AML comprises heterogeneous populations of leukemic cells. The evolution of leukemic clones occurs during the leukemic phase and the heterogeneity of these clones depends on the length of this phase, environmental exposure, and mutation rate.1 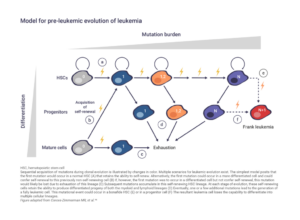 The acquisition of mutations is a dynamic process, and within a leukemic patient, different subpopulations of cells harboring different mutations can be found.7 Relapse in AML can be caused by distinct subclones with certain genetic changes.17 These genetic changes include:1,18

Different mechanisms of these genetic changes underlie the pathogenesis of AML, and their combination within distinct sub-clones forms a complex leukemic profile.19

AML is a complex disease with a complicated pathogenesis, driven by multiple mutations

Although patients with AML exhibit a lower number of coding mutations per exome compared with other cancers, factors including variations in gene expression, DNA methylation, and bone marrow microenvironment all contribute to the heterogeneous phenotype of AML.20

Based on the Cancer Genome Atlas AML substudy, 23 genes were found to be commonly mutated, and another 237 were mutated in 2 or more cases.21 Mutations associated with AML can be classified into the following functional categories:21

The estimated prevalence of AML worldwide is 0.6–11.0 per 100,000.22 The incidence rates of AML are higher in very high Human Development Index (HDI) countries compared with medium or lower HDI countries, with the highest incidence rate recorded in the Australian male population (11.3 per 100,000).23

The incidence and its change trend of AML

An analysis of the epidemiological trends of AML has been undertaken, based on the Global Burden of Disease 2017 database, calculated by the estimated annual percentage change (EAPC) values during the past 28 years.24 Globally, the incidence of AML gradually increased by 87.3% from 1990 to 2017.24 Males and the elderly were found to be more likely to be diagnosed with AML. Hemopoiesis derived from founder clones becomes more common with age.24 AML is mainly diagnosed in older patients and rarely occurs before the age of 40 years.24,25 Moreover, the incidence rate of AML was positively correlated with socio-demographic index values, resulting in a significantly higher incidence rate in the developed region compared to the developing region.24

The signs and symptoms of acute myeloid leukemia

Patients with AML initially present in a heterogeneous manner.26 A decade-long pattern of clinical presentation of AML patients compared with contemporary data corroborates that AML is a highly variable disease that presents with non-specific signs and symptoms.26

Most of the clinical manifestations of AML occur as a result of the accumulation of malignant, poorly differentiated myeloid cells within the bone marrow, peripheral blood, and infrequently in other organs. The majority of patients present with a combination of leukocytosis and signs of bone marrow failure, such as anemia and thrombocytopenia.27 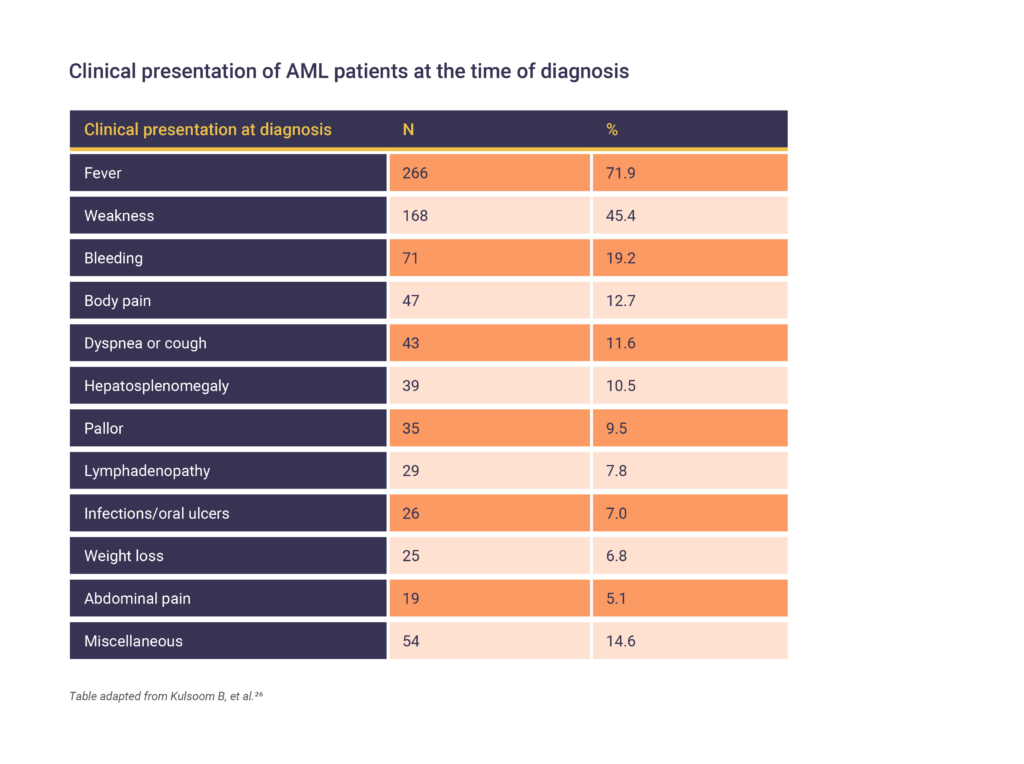 A key change in ELN 2017 is the reclassification of nucleophosmin 1 mutant (NPM1mut) AML with a low allelic ratio FLT3-internal tandem duplication mutation as favorable risk.7

Immunophenotyping
Expression of cell-surface and cytoplasmic markers is helpful for the diagnosis of AML. These markers include:7

Cytogenetics and molecular cytogenetics
Cytogenetic analysis and screening for commonly occurring gene mutations and rearrangements is mandatory when evaluating suspected AML.7 Although some myeloid neoplasms are characterized primarily by morphological and immunophenotypic assessment, the 2016 WHO update recognizes 11 acute myeloid leukemia subgroups defined by the presence of specific recurrent genetic abnormalities, including eight balanced translocations and inversions, and their variants, which mandates this screening.12,13 Other rare balanced rearrangements are recognized and involve genes such as those encoding epigenetic regulators (eg, KMT2A [MLL], CREBBP, NSD1) or components of the nuclear pore complex (NUP98, NUP214).7 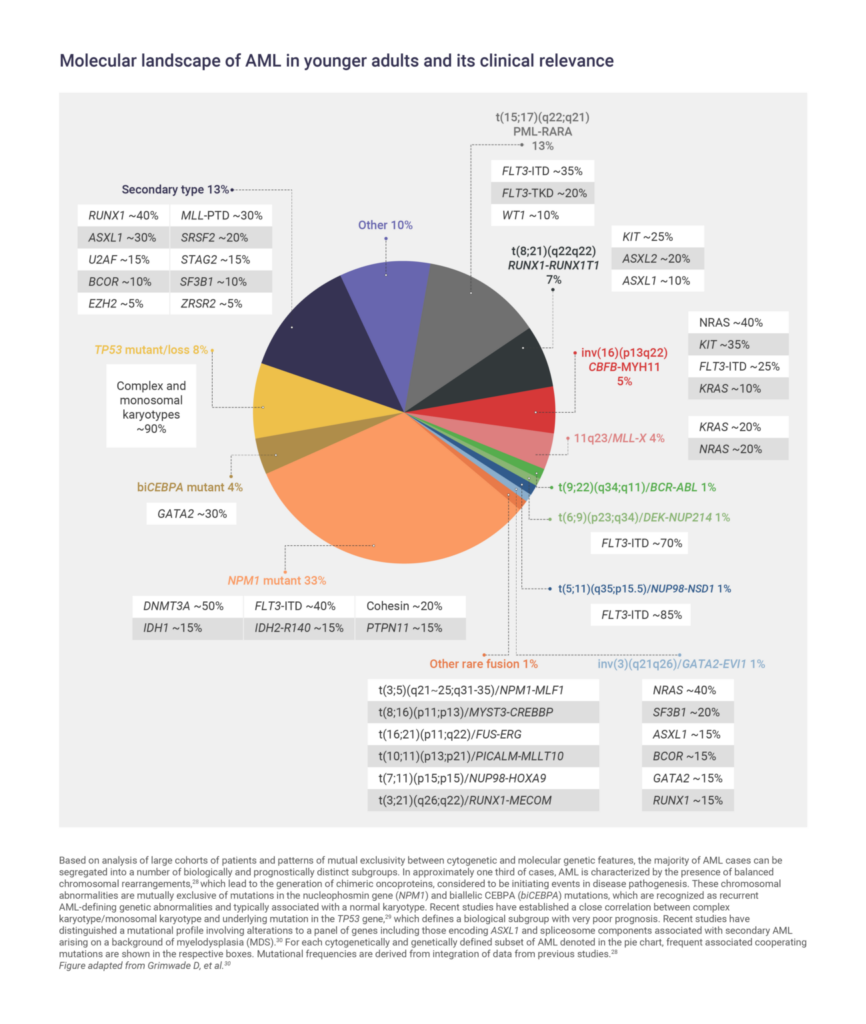 Molecular genetic testing
Diagnostic workup should include screening for:7

What is the prognosis of acute myeloid leukemia?

AML is associated with substantial disease burden and high healthcare costs, especially in patients with relapsed or refractory disease.31–34

In the US, the total average cost of treatment for newly-diagnosed AML patients was $352,138 per patient year32 and $439,104 per relapsed and/or refractory AML episode.31 The direct costs of medical care are noted to be lower outside the US.32

Treatment burdens associated with current therapies are reported in most patients: in a survey, 87% of patients reported at least one severe short-term effect and 33% reported one or more long-term side effects.33

Management of AML in adults
The outcome of AML is variable, with both patient-related and disease-related factors contributing to an individual patient’s likelihood of achieving response to therapy and long-term survival.13 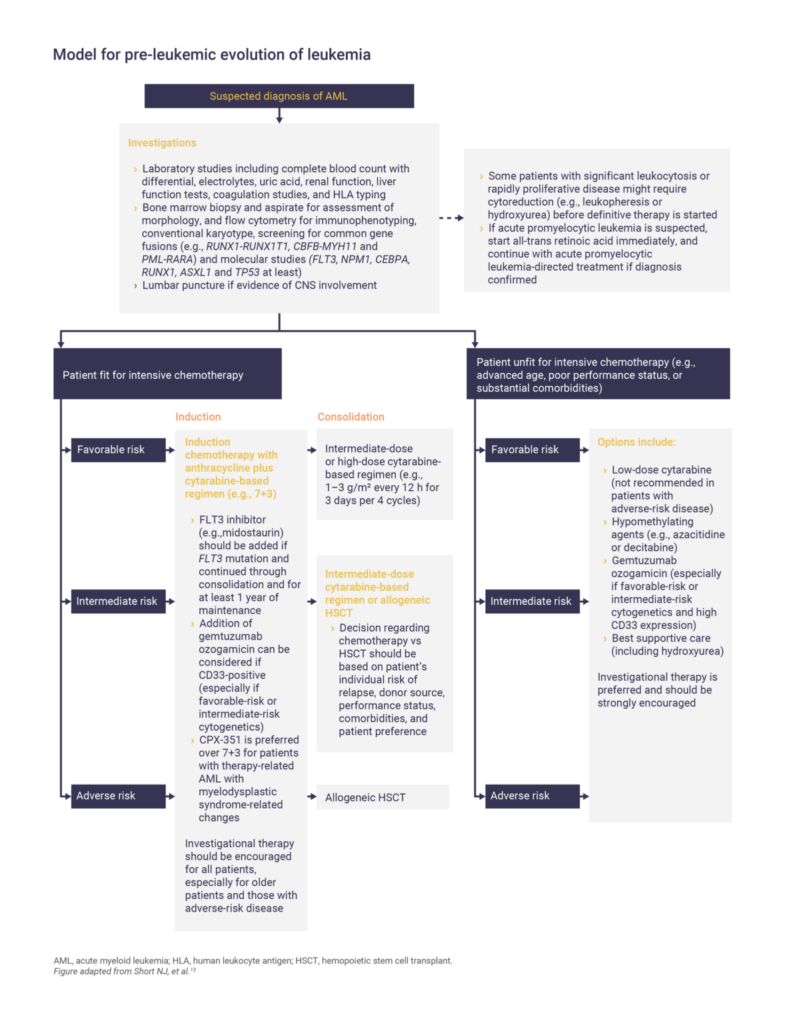 AML in the pediatric patient is treated similarly to adult patients.13 As with adult AML, supportive care has an essential role in improving outcomes in pediatric AML.35

Despite progress in recent years, relapse remains a challenging aspect. While 10–40% of younger AML patients are primarily refractory to AML induction therapy, for patients above 60 years of age, refractory disease is considerably higher (40–60%).36–39

The prognosis for patients with relapsed and/or refractory disease is poor, with an overall survival (OS) rate under 10% at 3 years.8