Diffuse intrinsic pontine glioma (DIPG) is a high-grade glioma that originates in the largest part of the brainstem, the pons, and is seen almost exclusively in children with a median age of diagnosis of 6–7 years.1–3 Among malignant central nervous system tumors in children younger than 20 years of age, 10–20% arise in the brainstem, with the majority being the DIPG subtype.4,5

Current treatment options are limited, and prognosis is poor; <10% of patients survive beyond 2 years from the time of diagnosis.6 One key characteristic of DIPG, next to its origin in the pons, is the tumor’s highly diffuse and invasive growth.7

Patients with DIPG typically present with varied neurological symptoms that reflect the anatomic position of the tumor.1 Three frequently occurring clinical characteristics, referred to as the “classic triad”, occur in >50% of patients.8,9 These include:8,9

Pediatric DIPG, which accounts for ~20% of pediatric primary brain neoplasms, exhibits a homogeneous and unfavorable course.10

Previously, pediatric high-grade gliomas (HGG) were thought to resemble adult HGG and were clinically managed as such. However molecular analyses have demonstrated that DIPGs and other pediatric HGGs are genetically distinct from adult HGGs.11

Tumor cell invasion is complex and is regulated by both intrinsic genetic and extrinsic environmental factors.7 Genomic tools, such as whole-exome and whole-genome sequencing studies have enabled the characterization of the genomic landscape of this disease.7

DIPGs can be sub-classified into 3 distinct molecularly defined groups: H3K27M, MYCN, and silent.12 Although many hallmark mutations have been identified in DIPG, it is important to note that intra- and inter-tumoral heterogeneity has been documented in this disease.1,13

The majority of DIPG cases (~80%) carry a specific point mutation in one of the histone 3 genes; H3.3 (H3F3A) or H3.1 (HIST1H3B), with the H3F3A mutations resulting in a worse prognosis than mutations in HIST1H3B, that results in the substitution of lysine 27 on the amino-terminal tail for a methionine (H3K27M).7 This mutation leads to the inhibition of polycomb repressive complex 2 (PRC2) which produces loss of histone trimethylation, resulting in epigenetic dysregulation of gene expression.1,14 In addition, recent integrated RNAi and drug screening has identified the polycomb repressive complex 1 (PRC1) component BMI1 as a critical factor for DIPG tumor maintenance in vivo, with increased expression of BMI1 being shown to be a direct product of H3K27M mutation.15 Consequently, inhibition of BMI1 exerts an anti-tumor effect by driving DIPG cells into senescence.15 Thus, targeting the clearance of senescent cells enhances tumor cell killing and prolongs survival.15

Other recently discovered alterations include:

Crucially, several molecular studies have shown that DIPG has distinct alterations when compared with adult HGG and non-DIPG pediatric HGG.14 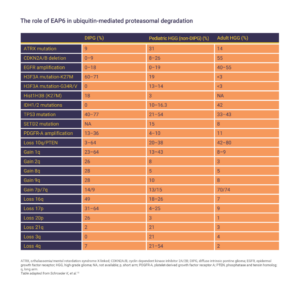 The estimated prevalence of DIPG

DIPG comprises approximately 10–15% of all pediatric central nervous system (CNS) tumors and 80% of brainstem gliomas.11,16 The peak incidence of DIPG occurs in middle childhood, with a median age of diagnosis ~7 years. Occasional cases have been reported in patients as young as 1 year or as old as 26 years, and the incidence is equally distributed between males and females.11 Among all the tumors in children, DIPG represents 20–25%.16,17

The signs and symptoms of DIPG

Before a diagnosis of DIPG, the median duration of symptoms is 1 month.11 Although these can last for greater than 1 year in atypical cases, early symptoms indicating the onset of the disease last almost universally for <6 months. DIPG progresses rapidly, therefore children typically receive clinical attention after manifesting symptoms for 1 month or less.1 Over 50% present with the “classic triad” of cranial nerve deficits on presentation, comprised of ataxia, cranial nerve palsies, and pyramidal tract signs.1,8,11

The first symptom is abducens palsy,11,18 manifested as unpaired eye movements (dysconjugate gaze) and double vision (diplopia) and associated with a worse outcome.11 Others include:5,11,17

A diagnosis of DIPG is based on clinical history; this includes time to presentation and physical symptoms, combined with radiologic magnetic resonance imaging (MRI) findings.1,14 DIPG tumors are typically hypointense on MRI T1-weighted images, and hyperintense on T2-weighted/fluid-attenuated inversion recovery images.1,11 Enhancement by gadolinium contrast media is either minimal or often absent – a key distinguishing feature of DIPG from pilocytic astrocytoma or other central nervous system tumors.11,14

On imaging, the core of the tumor is found in the pons, and at the time of presentation can occupy >50% of its axial diameter, invading the basilar artery.1 DIPG tumors rarely metastasize to distant sites, growing infiltratively and diffusely along nerve fiber tracts next to regions such as the thalamus and cerebellum.1 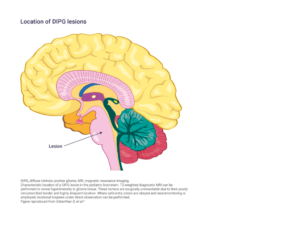 Previously, classic findings from physical examination and imaging were sufficient for the diagnosis of DIPG, and confirmation using biopsy was deemed unnecessary due to tissue sampling in high-risk anatomic regions.14,17 Advancements in diagnostic imaging techniques have further rendered biopsies unnecessary. This, combined with a perceived risk associated with obtaining a biopsy from the brainstem, have resulted in a paucity of DIPG samples to support basic science research.1 However, several studies have demonstrated the safety of biopsies,19–21 which has resulted in the growing role of molecular diagnostics as standard practice to improve diagnosis, support basic science research, and as a gateway for entry into ongoing clinical trials which require histological and molecular data.1

When tissue is available, diagnosis can be confirmed by histological review and can be supplemented by molecular biology.1 Alongside typical glioma immunohistochemistry panels, targeted antibodies for H3K27M, BRAF-V600E, and IDH1-R132H may be applied.1 Next-generation sequencing and DNA microarrays among other molecular pathology approaches are utilized to confirm the presence or absence of H3 mutation and the identity of the isoform affected can inform prognostic outlook.1 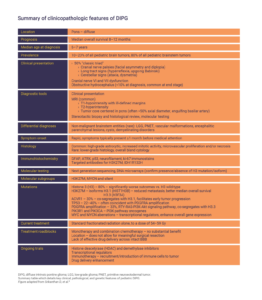 What is the prognosis of DIPG?

DIPGs can infiltrate beyond the pons, displaying highly diffuse and invasive growth. They commonly extend into other areas of the brain including the thalami, middle cerebellar peduncles, and basal ganglia.7,11 After diagnosis, median survival is between 8 and 11 months.11 When compared to pediatric glioblastoma, the prognosis for DIPG is the worst, with less overall survival.17 By contrast, median survival for adult brainstem glioma is the range of 30–40  months.22

A survival prediction model demonstrates that DIPG spreading to the medulla and midbrain is a negative prognostic value;23 however, a different study demonstrates that extrapontine extension was shown to be more common in short-term, compared to long-term, survivors.24 The impact of invasion on prognosis is thought to be due to the expansion into the pons by the tumor cells, distorting, displacing, and destroying nerve fiber tracts.25 For example, invasion of tumor cells to the adjacent cerebellum are associated with impairment of gait, coordination, and speech.26 Combating invasion is regarded as a potential means to improve both quality of life and survival and reduce serious secondary neurological effects.7 Together, these findings indicate the role of invasion in worsening prognosis, although local progression is viewed as the main problem in DIPG.7

The current standard of care for DIPG consists of standard fractionated radiation therapy in a dose of 54–60 Gy over a 6-week period, which improves life expectancy by a few months; this short-term efficacy is associated with widespread dissemination to extra-pontine regions and remains one of the major challenges with DIPG.7 Additional treatment options include:1

Due to the location, DIPG is not amenable to surgery, and chemotherapy agents are yet to show any response.25 The barriers to achieve a cure for DIPG may include the inability of the surgical resection, drug delivery difficulties due to failed penetration of the blood-brain barrier, and intra- and inter-tumoral heterogeneity in the identified molecular aberrations.25 Collectively, over 250 clinical trials in the last 3 decades have failed to improve the poor outcome of DIPG.27