Click here for the latest data presented at international congresses

Scroll through the timeline below to find out more about the history and progress of the understanding of Duchenne muscular dystrophy (DMD).

Register to learn more about key developments in treatment of the condition.

What is Duchenne muscular dystrophy?

Duchenne muscular dystrophy (DMD) is a rare, genetic neuromuscular disorder that is caused by mutations in the dystrophin gene.1 The disease is characterized by progressive decline in muscle function, leading to loss of ambulation and respiratory and cardiac failure.1

DMD is included under a spectrum of dystrophinopathies, which encompass incurable muscle diseases arising from mutations in the dystrophin gene. The severity of symptoms ranges from mild (such as asymptomatic hyperCKemia) to severe and progressive (Becker muscular dystrophy [BMD] and DMD).2–5

Dystrophin provides stability and structure to the muscle fiber and membrane during contraction.6 It is expressed in skeletal and cardiac muscle and localizes to the cytoplasmic face of the muscle cell plasma membrane, or sarcolemma.7–10 As part of the dystroglycan complex, dystrophin ensures connection of the intracellular contractile machinery to the extracellular matrix of myocytes, which provides mechanical support to skeletal or cardiac plasma membranes during contractions.6,10

DMD is caused by mutations in the dystrophin gene that result in an absent or defective dystrophin protein.1,2

The dystrophin gene is one of the longest human genes known and contains 79 exons.11

Overall, more than 7000 mutations, including deletions, duplications, and small mutations, have been identified in the dystrophin gene, many of which are clinically relevant.11,12

DMD is an X-linked recessive disorder that primarily affects males13,14
Mutations in the dystrophin gene follow an X-linked recessive inheritance pattern. Where the mutation is inherited, each son will have a 50% chance of inheriting the defective gene from his mother.9 Although daughters may also inherit the defective gene with equal probability, the presence of a normal dystrophin gene inherited paternally is compensatory, typically resulting in asymptomatic or milder forms of the disease in females.13,15

Several different mutation types can prevent the creation of a full-length, functional dystrophin protein16
The most frequent mutations observed in the dystrophin gene are:11,16

The more severe phenotypes of DMD may typically be associated with mutations that disrupt the open reading frame, resulting in truncated, nonfunctional protein. The more variable phenotype of Becker muscular dystrophy (BMD), a milder form of inherited, progressive muscle wasting (vs DMD), is associated, in most cases, with in-frame deletions that result in an abnormal, smaller, but still functional, dystrophin protein.4,15,16 The reading frame hypothesis holds for just over 90% of cases, however, exceptions exist.15 These involve patients with BMD carrying frame-shift deletions or duplications or DMD with in-frame deletions/duplications.15

Dysfunctional or absent dystrophin leads to muscle degeneration and fibrosis17,18
As a result of absent or dysfunctional dystrophin, the connection between the actin cytoskeleton and connective tissue is lost and muscle fibers are easily damaged during contraction, leading to chronic muscle damage, inflammation and eventually replacement of muscle fibers by fat and fibrotic tissue and thus loss of muscle function.17

Loss of muscle tissue begins in infancy and is irreversible13,19
The absence of dystrophin in DMD results in ongoing muscle damage and replacement of muscle fibers by scar tissue and fat.18,19

The prevalence of Duchenne muscular dystrophy

Although phenotypes for affected girls are usually much milder than in boys, in rare cases of chromosomal rearrangement or skewed X inactivation the disease severity can be similar to that seen in affected boys.13

In the US, the estimated prevalence of Duchenne and Becker muscular dystrophy was 1.38 per 10 000 male individuals in 2010 according to the Muscular Dystrophy Surveillance, Tracking, and Research Network (MD STARnet) Data and Statistics.26,27 The prevalence of DMD was three times higher than the prevalence of BMD.26

The signs and symptoms of Duchenne muscular dystrophy

Challenge in recognizing the signs and symptoms of DMD may result in diagnostic delay.28,29

In patients with DMD:

Diagnostic delay in DMD may occur for several reasons. Firstly, heterogeneity of presentation may slow recognition by healthcare professionals. Additionally, parental factors may play a part in widening the diagnostic timeframe, owing to hesitance in searching for a diagnosis due to conflicting feelings, as revealed during interviews.32

Recognizing suggestive signs and symptoms
DMD can be suspected in early childhood with delayed motor milestones, including delays in sitting and standing independently. The first symptoms of DMD identified by parents are typically general motor delays which include: clumsiness and frequent falling, gait problems including toe-walking, flat-footedness and delay in walking. Additional symptoms that may raise suspicion of DMD include learning and speech problems.1,2

The Gowers’ sign, a maneuver used to rise from a supine position in which a child uses their upper arms, pushing on their legs to compensate for weak pelvic muscles, is also a common early sign of the disease that can be detected.33,34

Earlier identification of motor delays allows for timely referral for developmental interventions as well as diagnostic evaluations and treatment planning.35

Other signs and symptoms of DMD:

Elevated CK levels reflect muscle damage and are a sign of certain neuromuscular disorders.39–41 A CK test should be ordered if: 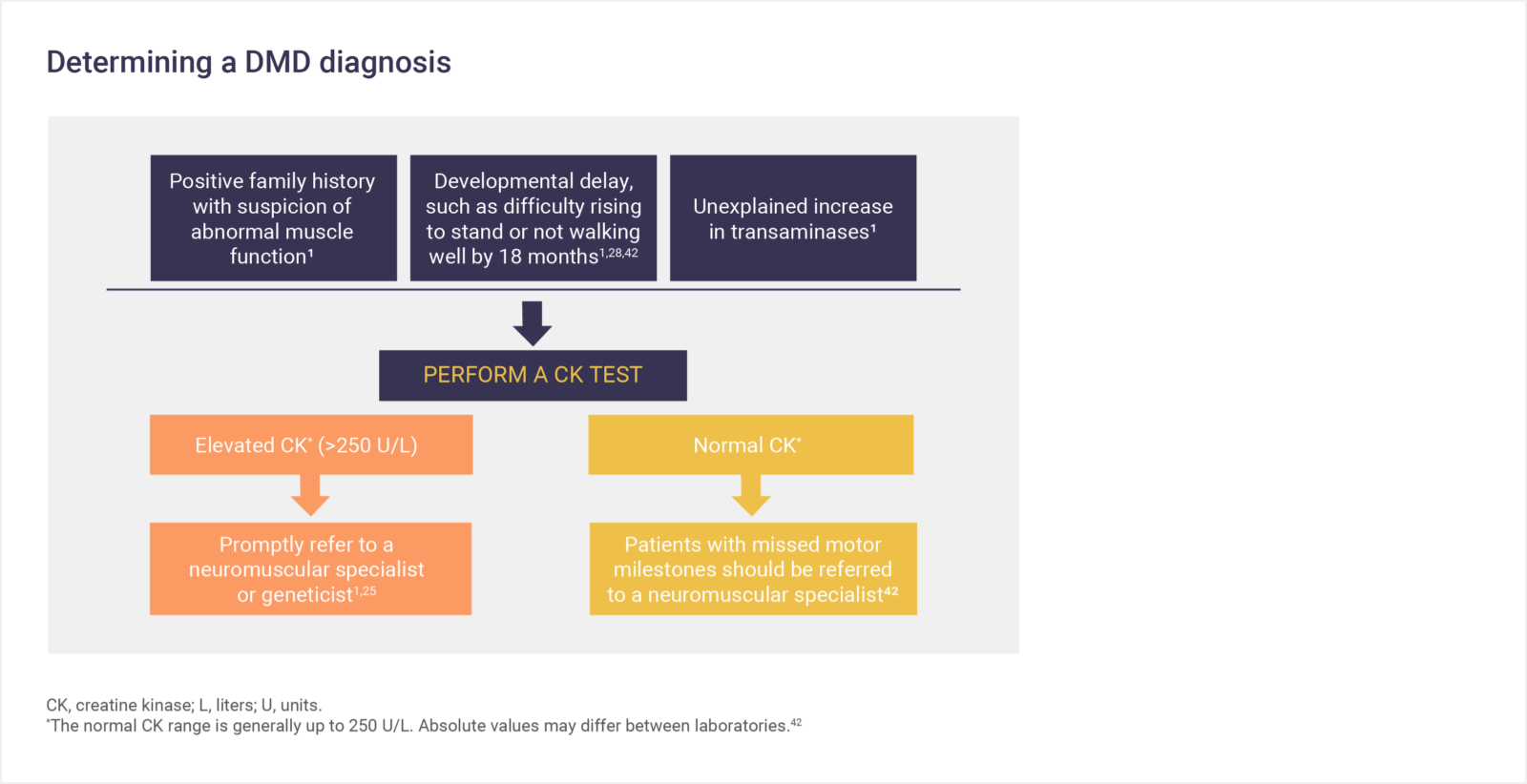 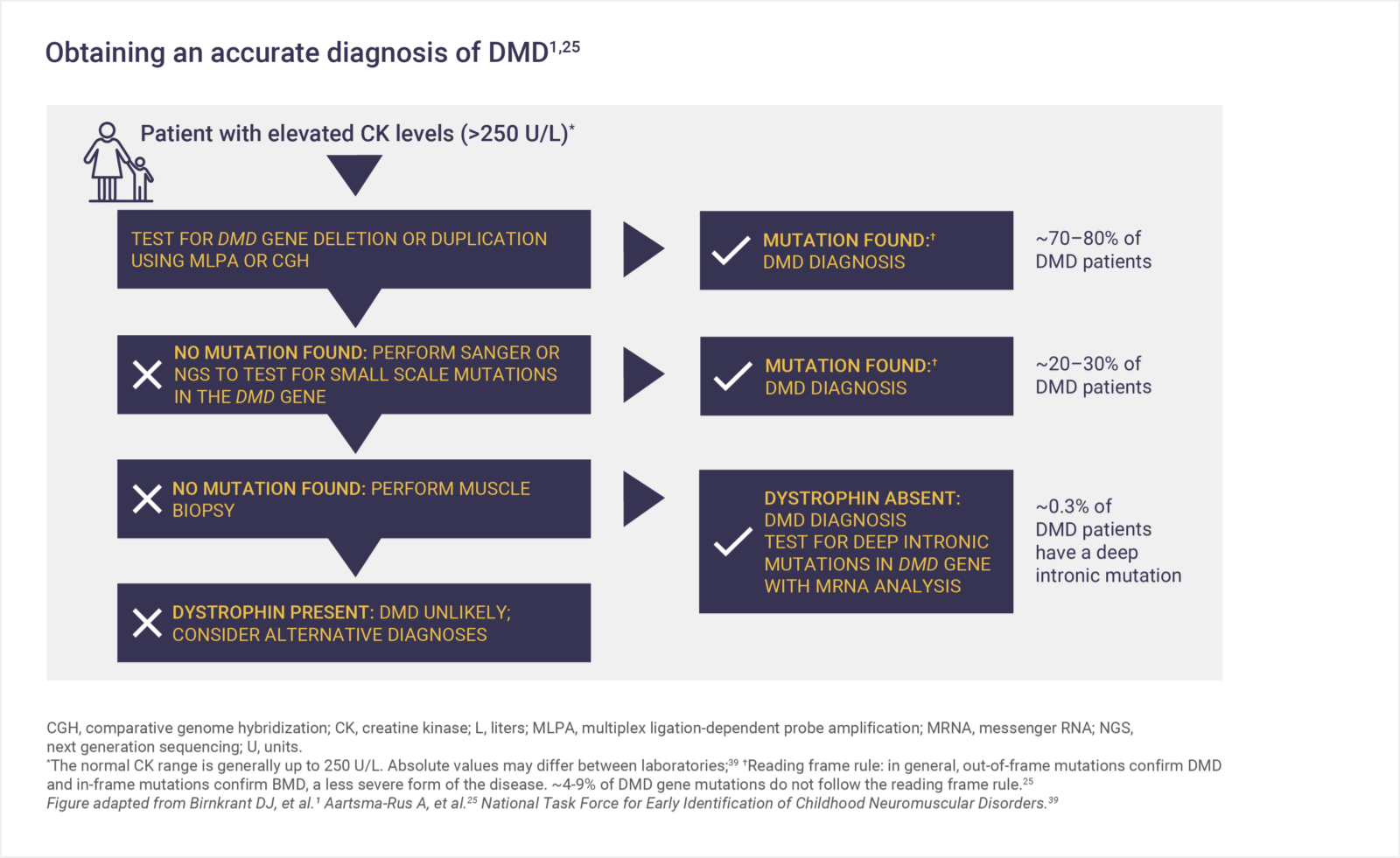 What is the prognosis for children diagnosed with Duchenne muscular dystrophy?

The natural history of DMD follows a relentless, progressive course during which patients lose functional ability over time.1

Interventions that potentially modify the natural history of DMD may be of greater benefit in the less damaged muscles of younger children.9,29,31 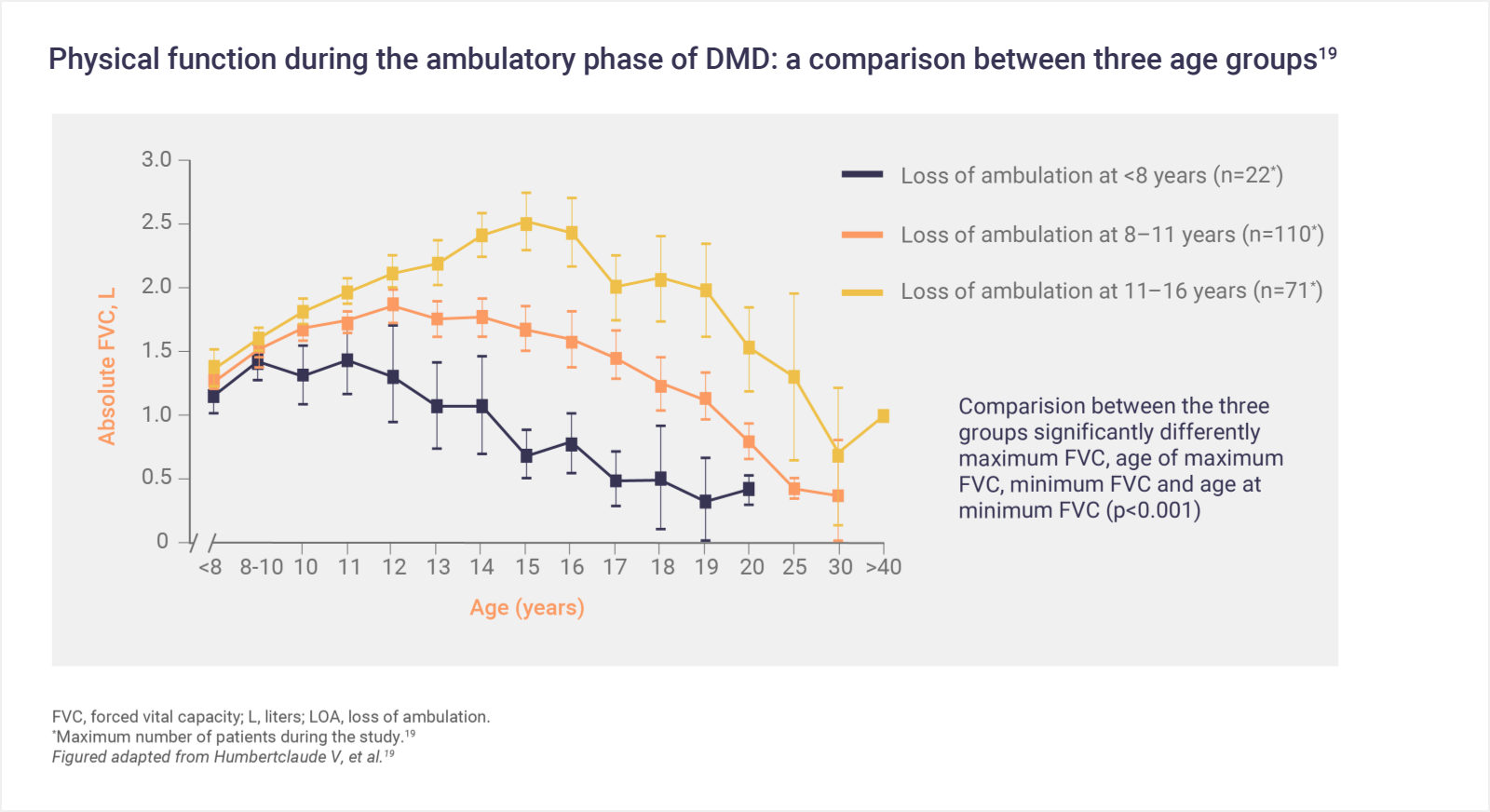 The management of DMD involves many healthcare professionals, and coordination among them is crucial to maximizing therapeutic benefit1
The DMD Care Considerations Guidelines suggest that upon confirmed diagnosis, a neuromuscular specialist should coordinate care across specialties and interventions.1 Along with improved patient survival, subspecialties caring for DMD patients have shifted to more anticipatory strategies to achieve prevention, earlier diagnosis, and better treatment of predictable and potentially modifiable disease complications.1

According to recommendations published by the DMD Care Considerations Working Group, patients, caregivers, and providers should engage in yearly discussion of long-term treatment goals and make use of resources that allow for proactive planning for unique health-related issues in DMD.45

Transition of care is needed to help patients navigate from adolescence to adult life
Considerations during the transition from pediatric to adult healthcare should include home accessibility and assistive technology, education and vocational planning, and independent transportation to maintain activities of adulthood.45

The 2018 DMD Care Considerations Working Group recommends monitoring psychosocial issues and referral to a psychologist and/or speech-language pathologist when appropriate for:45

Patients with DMD are at increased risk of anxiety and depression, especially during points of major care transition:45