What is AADC deficiency?

Aromatic L-amino acid decarboxylase (AADC) deficiency is a rare, autosomal recessive disorder of neurotransmitter synthesis.1–5 It presents with a wide range of symptoms, which develop early in life and include life-limiting motor and autonomic dysfunction and developmental delay.2,3

This short animated video provides an overview of AADC deficiency including prevalence, red flag signs and symptoms, and the clinical tests required to confirm a diagnosis.

There are currently around 100 disease-causing variants, with both homozygous and compound heterozygous mutations identified in patients with AADC deficiency.2,3,6,7

The most common variant is IVS6+4A>T; however, this mutation is present in less than half of known AADC deficiency cases.1,2​

There is no clear association between the severity of AADC deficiency with specific known variants; most variants result in a variable clinical presentation.2

This leads to a severe combined deficiency of dopamine, serotonin, and other catecholamines such as norepinephrine and epinephrine.1,2

In the absence of these neurotransmitters, neuronal signaling is inhibited in the central nervous system, which is required for motor development, behavior, and ​autonomic function.2

Reduced levels of neurotransmitters contribute to the spectrum of symptoms experienced by patients with AADC deficiency.8

The signs and symptoms of AADC deficiency

AADC deficiency is characterized by a wide range of clinical presentations.2,8

Hypotonia, oculogyric crises, delayed motor development, and autonomic symptoms are consistently associated with AADC deficiency.2 However, severity can range from mild to severe, accounting for a wide variability in presentation.2 ​Patients with more severe forms of AADC deficiency may ​never meet developmental milestones.9 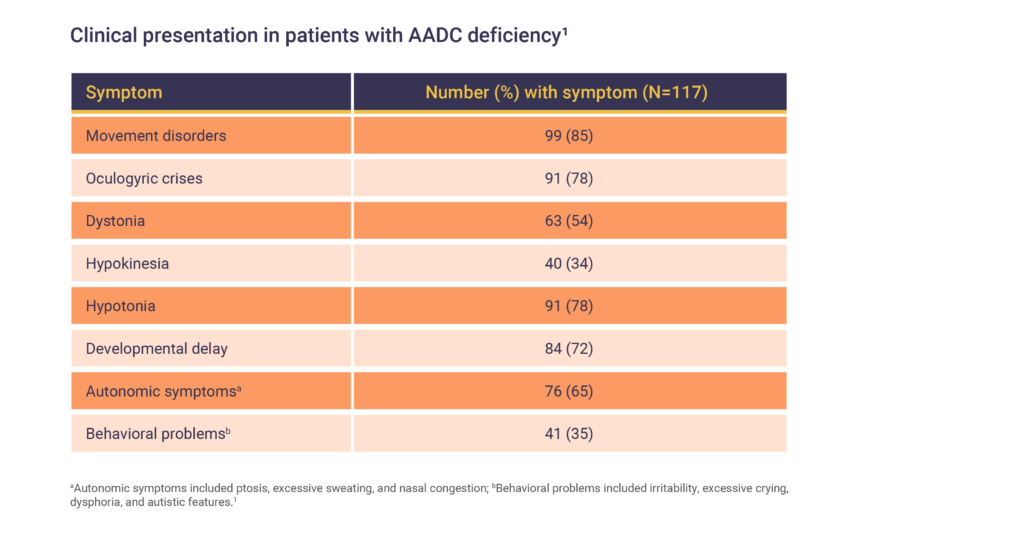 Experts discuss the challenge of identifying the signs and symptoms of patients with AADC deficiency.

Differential diagnoses: distinguishing AADC deficiency from mimics such as cerebral palsy and epilepsy

Experts discuss the challenge of distinguishing AADC deficiency from mimics such as cerebral palsy and epilepsy.

The estimated prevalence of AADC deficiency

AADC deficiency has been documented worldwide1 and can affect patients of varying populations including:1,2

The term birth prevalence or newborn prevalence is used in favor of incidence, which is the number of new cases of disease in a particular time. Prevalence is the number of living individuals with a disease at a given time and is a more precise term as applied to genetic conditions in which the genotype is present at birth.17

As with many rare diseases that are underdiagnosed, estimating the prevalence of AADC deficiency is challenging, with birth prevalence estimates ranging from 1:32,000 to 1:182,000, depending on the location surveyed.2,18,19

Patients with key signs and symptoms of AADC deficiency should be tested for a neurotransmitter disorder. 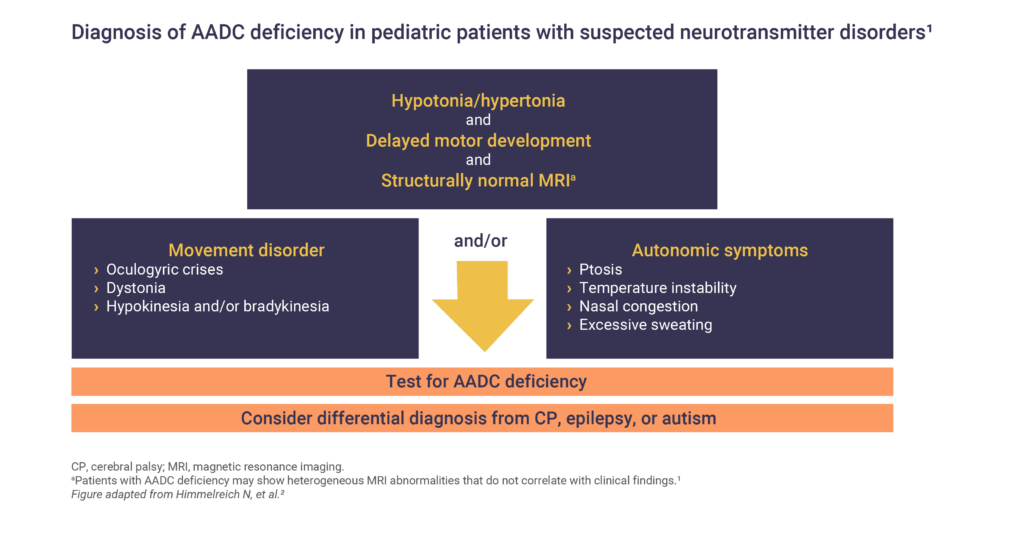 The 3 core diagnostic tests to confirm AADC deficiency are:1,2

Additional tests can be used to screen for AADC deficiency. These include testing 3-OMD levels in blood or plasma and urine organic acid analysis19,20,23,24

Dried blood spot testing for 3-OMD levels is a simple, rapid, minimally invasive test, that can be used to screen for AADC deficiency.4,19,23

It represents a potential option for newborn screening19,23 and may aid early diagnosis of AADC deficiency to help to bridge the delay in diagnosis of the disease.1,19

If levels of either 3-OMD or vanillactic acid are elevated, further confirmation using the core tests (plasma assay, CSF panel, genetic testing) should be performed.1

What are people asking the experts about the diagnosis of AADC deficiency?

Experts respond to questions posed during the live Q&A sessions from the symposia.

What is the prognosis of AADC deficiency in toddlers, infants and children?

In patients with neurotransmitter disorders such as AADC deficiency, clinical symptoms can be nonspecific and diagnosis is often delayed.27 As a result, patients and carers experience a difficult path to diagnosis with frequent misdiagnoses, such as cerebral palsy, myasthenia gravis or seizure disorders before the correct diagnosis is achieved.27 In the interim, misdiagnosis or delayed diagnosis may lead to worsening of the patient’s condition.27

Patients may experience other medical complications such as orthopedic complications and possible cardiac complications.1 In addition to growth failure, patients can experience an increased risk of infections, usually as a consequence of complications with impaired feeding and swallowing, reduced mobility, and recurrent hospitalization.1

The continual need for physical assistance and the behavioral complications of AADC deficiency are expected be a great burden to caregivers1,2
Those caring for individuals with AADC deficiency report a substantial impact on their emotional wellbeing as a result of their responsibility. Some caregivers report greater impact on their mental health than their physical health due to the metal tiredness that resulted from having to manage their numerous caring responsibilities. Other commonly reported emotional impacts were sadness as a consequence of watching the individual suffer and anxiety and worry about the individual’s uncertain future. Some caregivers even reported experiencing symptoms of depression and had to see a counselor or therapist to help them cope. 28

The patient impact in AADC deficiency has also been reported from the perspective of the caregiver. The most commonly reported emotion was frustration which would become apparent when patients were unable to do things for themselves or communicate their needs to others. 29

In AADC deficiency, the delay in diagnosis with frequent misdiagnoses is often stressful for caregivers and can result in significant financial burden to the healthcare system.27

For many patients with AADC deficiency, developmental delays, profound motor deficits and additional neurodevelopmental or psychiatric comorbidities which necessitate lifelong care as seen in other chronic diseases such as epilepsy, are associated with a high burden on caregivers and reduced quality of life.1,30,31

*Retrospective, descriptive, single-center study of patients who received a diagnosis of AADC deficiency at the National Taiwan University Hospital between 2004 and 2016