Amyotrophic lateral sclerosis (ALS) is the most common type of adult-onset motor neuron disease.1 It is a severe neurodegenerative disorder that results from progressive loss of neurons in the central nervous system.1–3

The death of motor neurons, which control voluntary movement in the motor cortex of the brain and in the spinal cord, causes progressive muscle weakness and functional decline, including loss of the ability to walk, speak, and swallow.1,2 As the disease progresses, a total loss of motor function eventually leads to paralysis and subsequent death.1,4

Currently, there is no cure for ALS, although 2 medications – riluzole and edaravone – have been shown to have some efficacy in slowing disease progression.5,6 Most therapeutic strategies are primarily aimed at alleviating symptoms.6

The pathogenesis of ALS is complex and is not completely understood.6,7 Environmental and genetic factors have both been implicated in the development of ALS.6,7 Risk is higher in individuals of male sex and of increased age.8

In most patients, the cause of disease is unknown.6 This is classified as sporadic ALS (sALS), and accounts for up to 90% of cases.6

Although no environmental risk factors have been proven to be causative of sALS, factors such as smoking, and exposure to agricultural chemicals and heavy metals, have been shown to increase the risk, due to oxidative stress and neuroinflammation.7,9 Evidence also suggests that there may be an increased susceptibility to ALS among athletes, though physical activity itself is not yet proven to be a cause of disease.9

Other molecular mechanisms involved in the pathology of ALS include a link between ALS occurrence and defects in the structure and function of mitochondria.7 Inflammatory processes and non-neuronal cells have also been implicated in the onset and progression of sALS.4

The remaining 5–10% of cases of ALS are familial ALS (fALS), with an autosomal dominant pattern of heritability.5–7,9 Mutations in at least 30 genes have been found to be causative of sALS and fALS.1,8

The most common genetic cause for fALS is now known to be a hexanucleotide repeat expansion in the C9orf72 gene.6 These repeat expansions cause accumulations of dipeptide repeat proteins, which are translated from the GGG GCC repeats, located in a non-coding region of the gene, and account for between 30% and 50% of fALS cases.1,6,10 This genetic mutation is also responsible for 5–10% of sALS cases.1,6

Mutations in the superoxide dismutase 1 (SOD1) gene, which lead to intracytoplasmic aggregation of the SOD1 protein, are also implicated in ALS.8 Mutations have been found in every exon of SOD1 in patients with ALS since they were first associated with the condition in 1993, and they have been reported to account for approximately 20% of fALS and around 5% of sALS cases.11,12 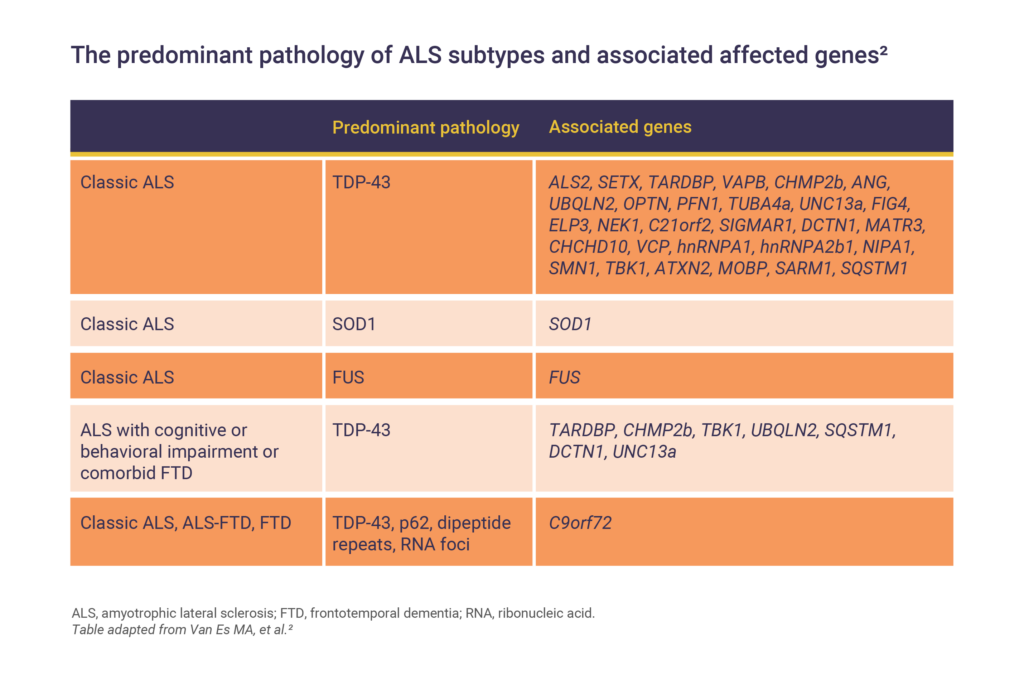 The fact that many different gene mutations have similar clinical phenotypes suggests that multiple mechanisms cause ALS.3 Alongside this, the fact that a single genotype can cause different clinical presentations indicates that one mechanism can lead to multiple phenotypes.3 This suggests that there is likely a complex interplay between genetics and environment, which leads to the development of ALS.3

Among patients diagnosed with sALS, about 5% will harbor the causative gene mutations seen in fALS, indicating that their condition has been misclassified based on genetic history.3 Additionally, some patients will harbor predisposing genetic variations, such as ATXN2 intermediate repeat expansions and mutations in UNC13A.6

Both fALS and sALS present with common pathological and clinical features.8

Demographics of patients with ALS

Estimated incidence and prevalence
ALS is the most common adult-onset form of motor neuron disease.1,10 The cumulative lifetime risk of ALS is about 1:350 in men and 1:400 in women.6,8 Worldwide, 30,000 patients are expected to die from ALS every year.5

However, significant geographical differences in prevalence and incidence exist globally: both are higher in developed regions.6,11,13 This may be because population aging is increased in developed regions, and there is a correlation between prevalence and incidence and an aging population.13 It is thought that regional variance observed in disease incidence could correspond to differences in ancestral origin or environmental exposure.14

European countries with higher latitudes report increased incidence rates: a trend consistent with genetic evidence, suggesting that the risk for ALS is highest in Scandinavian countries and follows a north-to-south gradient.15

Overall, this suggests that 1–2 new patients per 100,000 will be diagnosed with ALS each year in Europe and the United States.8

Age of onset
The mean age of ALS onset is variable, ranging from between 40 and 60 years of age for fALS and 58–63 years for sALS, though geographical variation has been reported.6,16

The signs and symptoms of ALS

The clinical presentation of ALS is heterogenous and its phenotype can be categorized as spinal/limb or bulbar-onset, based on clinical characteristics and site of onset.2,4 Approximately two-thirds of patients have spinal onset disease, which typically presents with focal limb muscle weakness and wasting.4,6 This most often starts in the limbs, more often in distal muscles than in proximal muscles.6 Spasticity may develop in the weakened atrophic limbs, affecting manual dexterity and gait.4

In an estimated third of cases with bulbar-onset ALS, the first signs of disease may include difficulty chewing, speaking, or swallowing.4,6,8 Patients may also present with limb symptoms.4

Hallmarks of the condition include progressive muscle weakness accompanied by muscle atrophy, fasciculations, muscle cramps, and slowness of movement.6

The onset of weakness in ALS is usually focal and typically spreads to adjacent body regions.6 There is usually a recognisable association between spreading of the disease within the motor system and neuroanatomic progression in myotomes and the motor cortex.6

In later-stage disease, muscles of the eyes and bladder may be affected.8

About 50% of patients will suffer from extra-motor manifestations to some degree, in addition to their motor problems.6 In 10–15% of cases, an additional diagnosis of frontotemporal dementia can be made, while 35–40% of patients will have mild behavioral and/or cognitive changes.6 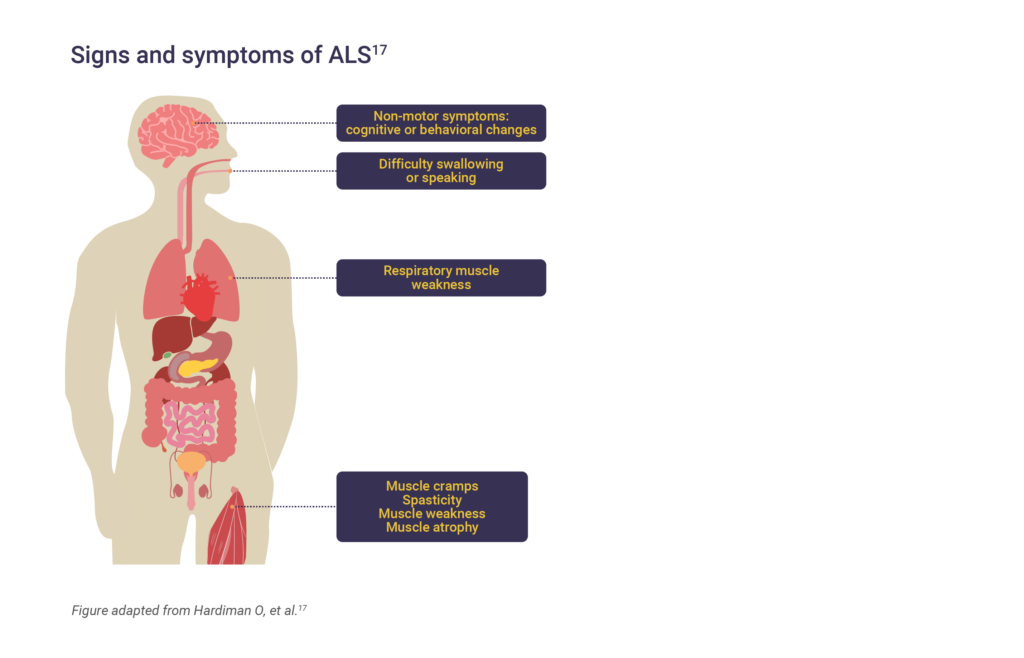 Determining a diagnosis of ALS

Symptoms of ALS are nonspecific to the disease and may resemble other neuromuscular diseases.16 Early diagnosis can be challenging, especially in cases where motor symptoms are confined to 1 region, or to upper motor neuron (UMN) and lower motor neuron (LMN) systems only.6 Misdiagnosis, common in the early stage, can therefore delay ALS diagnosis.16 A lack of existing confirmatory biomarkers means that clinical progression must usually be observed before confirmation of a diagnosis.16 The time taken to demonstrate this has led to reports of a mean or median diagnostic delay: despite a mean age of onset of ~62 years, the mean age of diagnosis is 64 years and median age is 65 years, demonstrating a mean diagnostic delay of at least 12 months.15,16

The diagnostic criteria of ALS are:18

A definitive diagnosis is ascertained by:18

For research purposes, ALS is classified and measured by the Revised El Escorial criteria, which improves homogeneity in recruitment for clinical trials and other clinical studies.12,19 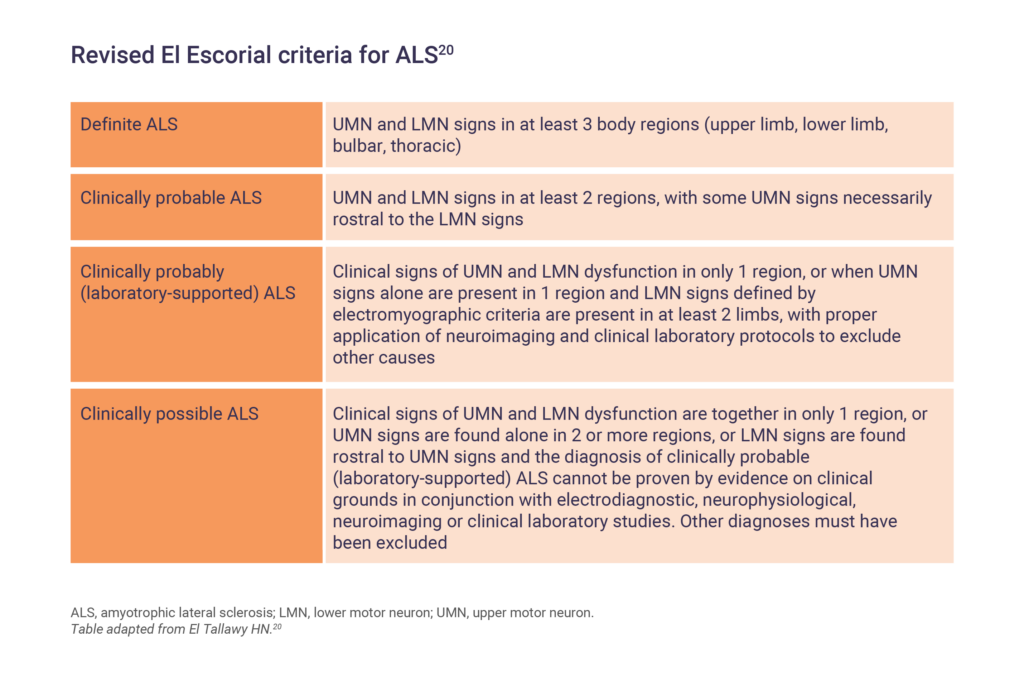 As ALS is a rare disorder, other more common diagnoses require consideration and exclusion before a diagnosis can be reached. These include peripheral neuropathy, Lyme disease, vitamin B12 deficiency, thyroid disease, and metal toxicity.8 Reversible motor neuron disorders, such as those typically associated with autoantibodies, should also be excluded before a diagnosis of ALS is made.8

A sensitive set of electrodiagnostic tests, formulating the Awaji criteria, can be particularly useful in the early diagnosis of people with bulbar-onset disease.12 This is important because gastrostomy is often required when swallowing is affected.12

It should be noted that both the El Escorial and Awaji criteria are limited by a lack of clinical sensitivity and, overall, there is an unmet need for clinical diagnostic criteria of ALS and related subtypes of motor neuron disease, which needs to be addressed to reduce the diagnostic delay.6

What is the prognosis of ALS?

There is variability in the rate of disease progression of ALS;6 however, the course of disease tends to be relentless and usually results in death due to respiratory paralysis 3–5 years from diagnosis.1,8 About 10% of ALS patients are reported to have a slower form of the disease, with survival of 10 years or longer.16

Predictors for longer ALS survival include male sex, younger age at onset and diagnosis, higher body mass index (BMI), an increased delay in time to diagnosis, slower progression rate, and multidisciplinary clinic attendance.16,21 Improved survival is also associated with spinal (vs bulbar) onset.13,16 Conversely, respiratory or genitourinary comorbidities and the presence of both cognitive impairment and depression have been identified as negative predictors of survival in ALS patients.22,23

The ALS Functional Rating Scale – Revised is a validated questionnaire based scale that can be used clinically to monitor disease progression.24 The questionnaire uses 12 questions of physical function scored between 0 (no function) and 4 (full function) to generate a summary score, defining the functional stage of the patient.24

When respiratory failure can no longer be managed by non-invasive ventilation, patients can undergo tracheotomy to help prolong survival.25 The median survival after tracheotomy is reported to range from 8 months to 3 years.25 However, only 10% of patients in Western countries elect to undergo tracheotomy – this rises to 30% in Japan, suggesting cross-cultural differences in the management of ALS patients.25