What is Huntington’s disease?

Huntington’s disease is a rare, hereditary, degenerative disorder of the brain.1 It is characterized by a combination of motor, behavioral, and cognitive disturbances.2,3

Motor symptoms are a mixture of chorea, bradykinesia, and dystonia,2,3 which affect posture, balance, and gait.2 The onset of motor symptoms can occur at any age, but the mean age at onset is typically between ~45 years.2,4

Most people start developing symptoms during adulthood, between the ages of 30 and 50; it can also begin in childhood or early adulthood, known as juvenile Huntington’s disease (JHD).5

Disease severity is determined by the number of CAG repeats, with a large number of triplets indicating earlier onset.2,5 Unaffected individuals have around 20 CAG repeats in the HTT gene, but people with Huntington’s disease have 40 or more.6

The huntingtin protein structure and function

The normal wild-type HTT protein is a large (~348 kDa with a normal polyQ repeat length of 23 glutamines), universally expressed protein that is present in varying levels depending on cell type.7 It has an extensive number of functions that are still being defined, but is thought to be involved in:8 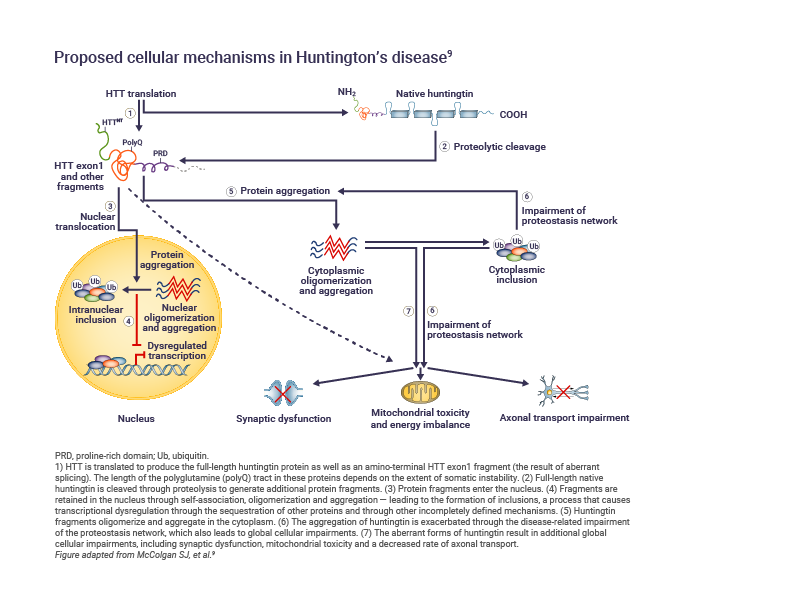 The signs and symptoms of Huntington’s disease

Individuals with Huntington’s disease gradually begin to develop motor, cognitive, and psychiatric disturbances, with signs and symptoms varying widely from person to person, and between stages of the disease.10,11

Involuntary, unwanted movements are the primary motor manifestations in Huntington’s disease, starting in the distal extremities such as fingers and toes, before spreading to all other muscles in the body.10 Motor symptoms include:11 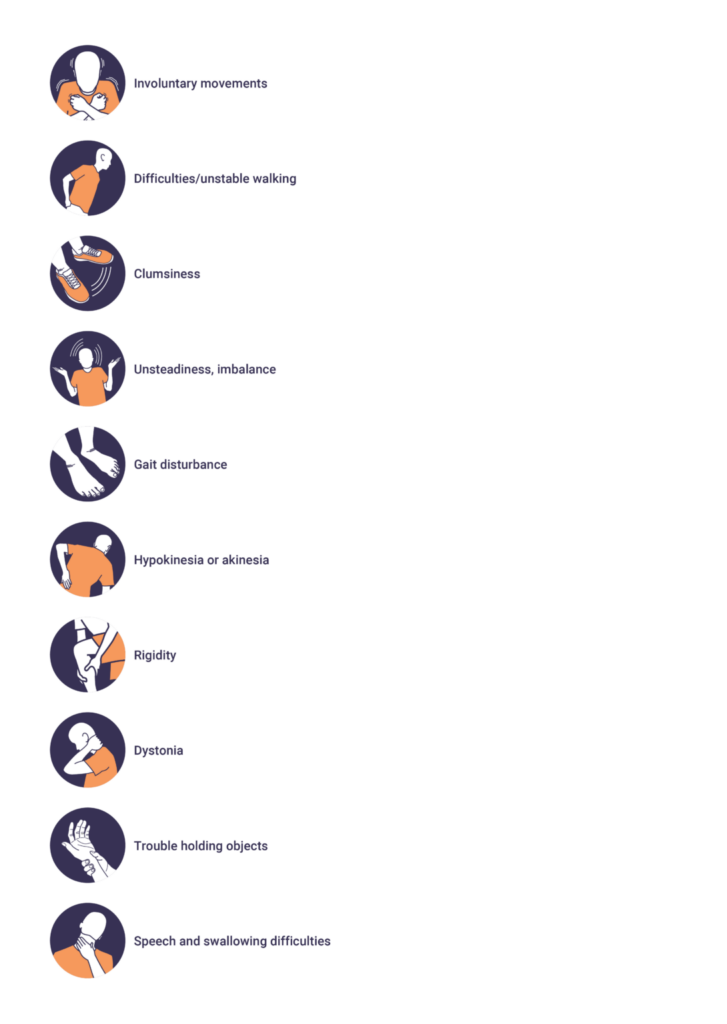 Cognitive symptoms of Huntington’s disease may be evident more than 15 years before motor diagnosis and develop gradually, eventually being widespread across faculties at the later stages of the disease. These include:2,12–14

Psychiatric symptoms frequently present in the early stage of the disease, often before the onset of motor symptoms.10 The most prevalent include:2,10–12 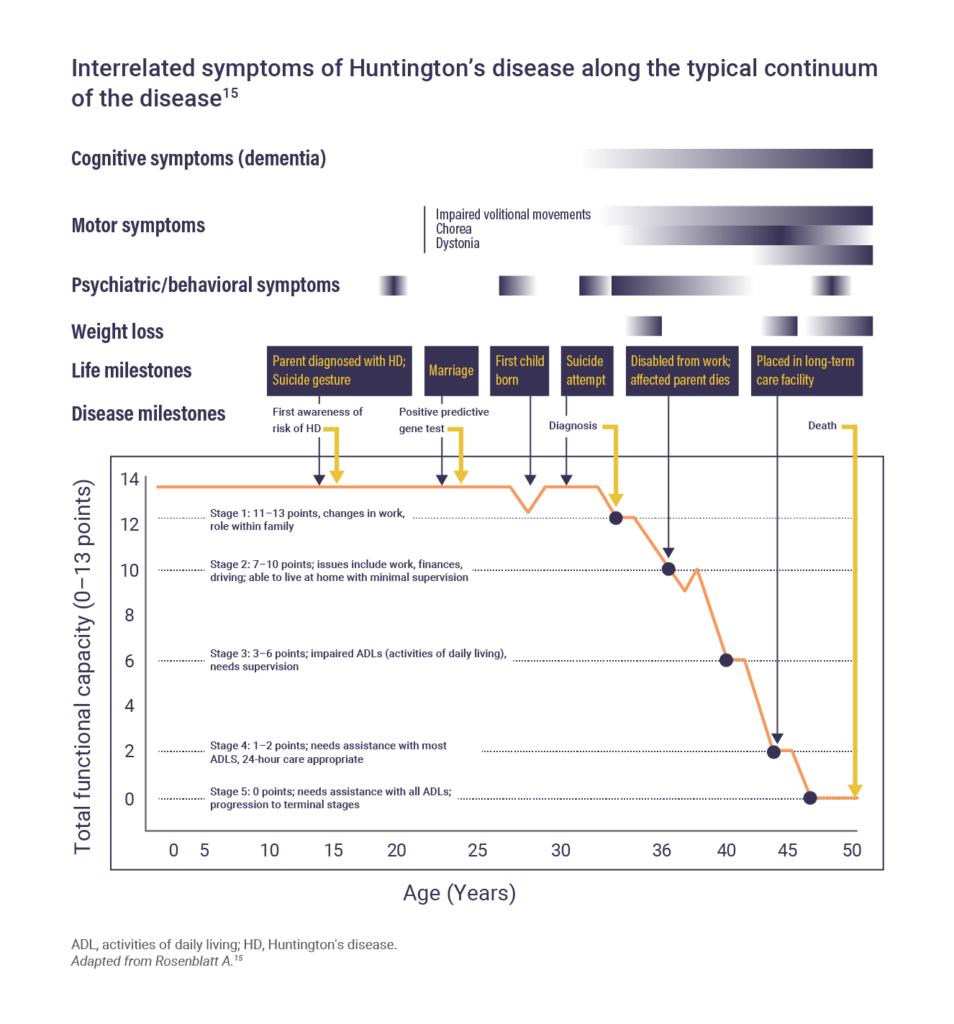 Some symptoms will fluctuate in severity during the progression of the disease, others will steadily worsen.15 It is important to recognize that each person with Huntington’s disease is different, and while the disease has an overall progression, the onset of symptoms and their severity is unique to each case.15

The estimated prevalence of Huntington’s disease

Following the introduction and wide implementation of genetic testing for Huntington’s disease, the accuracy of prevalence estimates has improved and resulted in several populations with substantially higher prevalence than previously thought.17

Huntington’s disease is currently diagnosed through a combination of clinical assessment and genetic testing.2,10,12

The preliminary diagnostic work-up of a suspected case of Huntington’s disease involves questionnaires, a general physical exam, a review of family medical history, and neurological and psychiatric examinations.18

Brain imaging (MRI, PET, or CT) may also be performed to assess the structure or function of the brain. These images may reveal structural, functional, and molecular changes in areas of the brain affected by Huntington’s disease; however, such changes may not be seen if imaging is performed early in the course of the disease.18,19

If symptoms and initial tests strongly suggest Huntington’s disease, it is recommended that genetic testing is performed to confirm a diagnosis.18

Performing a genetic test may also be valuable if there has been no known family history of Huntington’s disease.18 A predictive test indicates whether someone has or has not inherited the gene mutation, but it does not make a clinical diagnosis of Huntington’s disease if the gene expansion is present. International guidelines recommend patients undergo pre-test counseling provided by a genetic counseling unit to make an informed decision regarding the risks and benefits of testing.9,20

What is the prognosis of Huntington’s disease?

Huntington’s disease progresses slowly over 15–20 years,21 with the average age at death being 54 to 55 years.2 Pneumonia and injuries related to falls are the most common causes of death.10,22

Individuals diagnosed with juvenile and late-onset Huntington’s disease have a shorter duration of illness compared with those with disease onset between 20–49 years of age.23 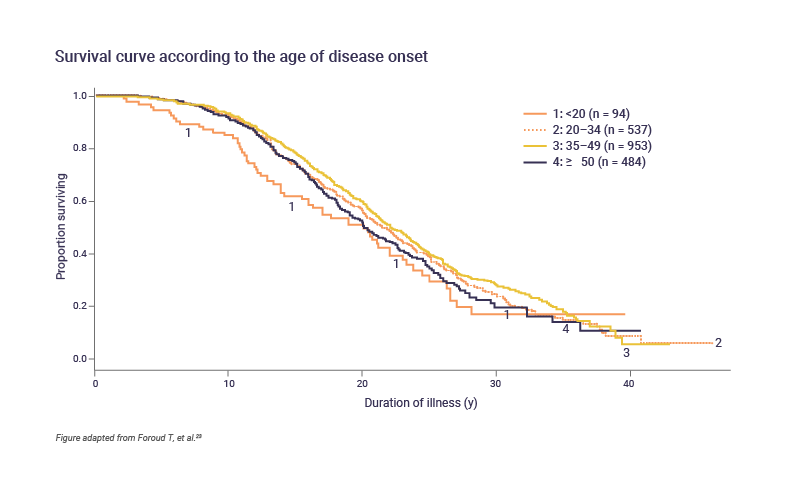